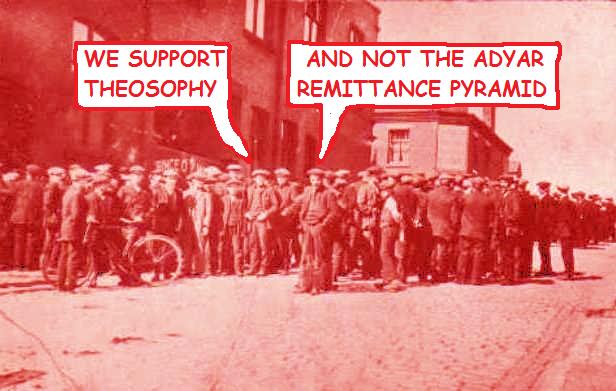 A clear division has now emerged in the Adyar Theosophical Society between those who benefit from the multi-level marketing operation and those who pay their fees for nothing in return, with not even a say in the running of the organisation.

National leaderships and inner circle exclusive groups such as the Esoteric Section do quite nicely out of facilities and status provided by the Society, and the ruling elite are prepared to grant them favours to keep them on board. In return, those benefitting are prepared to keep quiet and not rock the boat. This is the primary reason for the General Council’s policy of silence. The general membership gets nothing for their remittances and are just expected to pay up to support the Adyar pyramid of resources and privilege.

It was a bit too much to expect Timid Boyd to turn from compliant, silent candidate to an assertive presidential role, and he is now doing his best to assure the ruling elite that he is the no-change option.

The separation of the Adyar Theosophical Society in an alliance of equal status independent groups without the drain of controlling financial beneficiaries would liberate the Theosophical Movement, and allow it to move forward for the benefit of Theosophists and Theosophy. Under this system Adyar would still be free to make a case for being supported but would no longer be the automatic beneficiary at the top of a payments pyramid.